Skiing at Tarantino's Telluride: On location for The Hateful Eight

Driving down Telluride's main strip, Colorado Avenue, is quite an experience. Authentic western-style hotels, bars and restaurants line the street, the snow-draped ridges and peaks of the San Juan Mountains line the horizon, and the steep ski runs of the town's high altitude ski resort snake down to the edge of town. Throw in a Hollywood star loitering on the corner of Colorado and Aspen and it all becomes slightly surreal.

“Let's turn back and check.”

In September, movie stars are a common sight in Telluride, when the annual film festival is in town. However, this was March and the reason for Samuel L Jackson's presence in Colorado's wildest ski resort was that he – along with Kurt Russell, Jennifer Jason Leigh, Michael Madsen and Tim Roth – was shooting Quentin Tarantino's latest film, The Hateful Eight, in the surrounding mountains.

The movie is a classic Tarantino western, complete with larger than life characters, and plenty of gore; it's set on a high mountain pass where the eight protagonists are seeking refuge from a blizzard. Telluride's average annual snowfall, almost eight metres, practically guarantees a wintry atmosphere, making it a shrewd choice of filming location.

After a quick U-turn (easy on Telluride's wide streets) we were off hunting for film stars. Needless to say Mr Jackson had vanished, but no matter, we were here to ski rather than gawp at actors.

And what skiing it is. Tom and I had arrived in Telluride on the tail end of a storm that had deposited more than a metre of snow on the surrounding mountains, and the sun was beginning to glimmer through the scudding clouds on to the dusty fresh snow the resort is renowned for.

Another Telluride hallmark is its steep terrain, which has to be accessed by a steel bridge. The resort's infamous “Stairway to Heaven” is a combination of steel staircases and a bridge that allows access to the vertiginous, double-black diamond terrain of Gold Hill Chutes 9 and 10, for skiers who like their riding to encompass a touch of terror. At an altitude of around 3,960m, Gold Hill Chutes – amid Rocky Mountain scenery – will take your breath away in every sense. With the recent snowfall it was going to be a challenge getting down in one piece, so I was somewhat relieved when a risk of avalanche resulted in Telluride Ski Patrol closing the chutes for the day.

Instead, we headed for the Gold Hill Express Chair and spent the morning doing laps of the double-black diamond runs that snake between the trees. The snow glittered like crystals in the sunshine, both from occasional snow showers and from the powder puffs left hanging in the air by the passage of our skis.

The scenery does its best to compete with the skiing. While many Rocky resorts sit beneath the tree line, Telluride has the altitude to ensure that its higher peaks stand proud of the trees. 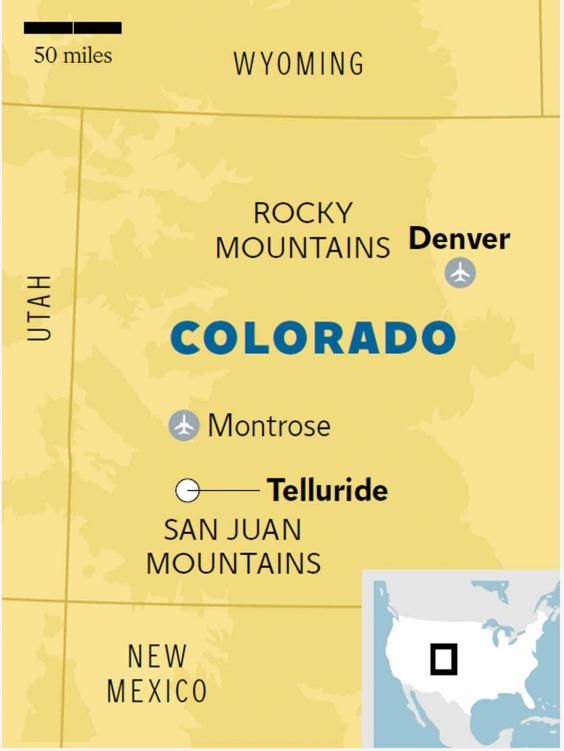 There's a feeling of wilderness as you look out across the San Juan Mountains – there are no neighbouring resorts and associated infrastructure, no mountain villages, alpages or roads to be seen – were you to venture off into the backcountry you'd be seeing the Wild West much as it appears in The Hateful Eight, which is set after the American Civil War.

The fact that the higher slopes sit above the tree line has its advantages if, like me, your tree skiing tends to be more of an exercise in accident avoidance than a graceful dance between the firs. You can find plenty of open bowls in which to lay down wide, easy turns – or you can simply head to the array of exciting pisted terrain above town.

This is where Tom and I found ourselves in the afternoon after a superb lunch at Alpino Vino, which claims to be the highest restaurant in the US. We were standing atop a range of surprisingly steep blue and black runs (there are no reds in the US) ready for the thrilling 1,000m descent into town on a black run named Bushwhacker. It was sufficiently free of other skiers for us to be able blast full pelt all the way into Telluride over and over again until the altitude finally got to us and we decided to call it a day.

Downtown that evening, we discovered a range of bars and restaurants in which the Wild West theme was prevalent. Little more than 100 years ago, Butch Cassidy was high-tailing it out of town with $21,000 (around $500,000 in today's money) in his saddle bags after holding up the San Miguel Valley Bank on Colorado Avenue.

Perhaps that's part of Telluride's appeal – the renegade spirit of the former mining town has migrated up into the mountains where, on your skis or board, you can push it as hard as you want. If Butch had skied instead of robbed banks he'd have loved it.